The new Swedish classic hard rock band MAJOR INSTINCT is the brainchild of M.ILL.ION founder, main songwriter and bass guitarist B.J Laneby. After 25 years, seven highly critically acclaimed albums with six figures sales and international touring, he decided to put M.ILL.ION to rest and start something new. This decision came after B.J became very ill and actually nearly died at the end of their last UK-tour (June/July 2014). Several months of intensive care both in the UK and in Sweden followed and once conscious and recovering, he had a lot of time to think. Said and done, the best musicians and the coolest guys available in Sweden were picked and in late December 2014 MAJOR INSTINCT was formed in Gothenburg. A BAND, not a project! The line-up soon was completed with Stefano Marchesini (lead vocals, ex HUMAN RACE),  Magnus Mild (guitars), Johan Häll (drums, ex- M.ILL.ION)  and 22-year old newcomer Gabriel Glamheden (Hammond & keys).
The songwriting took place in the first part of 2015 and carries on the vibe of bands like Thin Lizzy, Whitesnake, KISS and Deep Purple. The major part of the lyrics, all written by B.J Laneby, reflects on the rollercoaster ride called life.  A couple of rough recordings were sent out to some contacts in the business and very soon there were offers on the table. In May 2015, the band decided to go with Metal Heaven and MAJOR INSTINCT signed a deal with them for Europe. 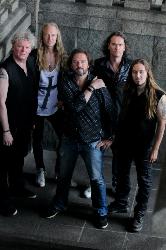 With a deal and a budget in place, July 2015 was spent in the Rabbit Hole Studios in Gothenburg Sweden. Guitarist Magnus Mild was the engineer, Victor Olsson took care of the mix and Martin Kronlund of JM Studio mastered the album.
“High Five”, a straight catchy rock´n roll song with a positive message was chosen as the first single and a video clip: "We can do it together!" Be it the team, the band or the couple. The release date for both was on September 30th, 2015. The video for this track was directed by the video producer & photographer, the talented Mr Alex Kristoffersson.
“Roots & Wings” is the name of the album which finally will see the light of day on AOR Heaven on November 27th, 2015. On the same day the band will make their first live appearance at the launch party/release at Musikens Hus, in Gothenburg Sweden. 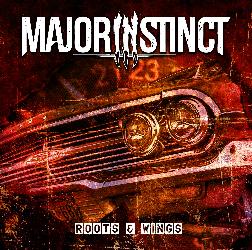