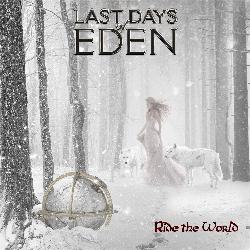 LAST DAYS OF EDEN is a female fronted symphonic metal band formed in 2012 in the Spanish Northern region of Asturias. With epic folk influences added to their symphonic sound, they perform a melodic style that also carries Celtic and classical trademarks.
The band released an EP with six songs in 2014 which gained them a lot of recognition around the world and was extremely successful especially in Europe and in Japan.

During the year 2014 LAST DAYS OF EDEN played shows with U.D.O. and  DEVIL’S TRAIN amongst others. After that, the Spanish six-piece entered the studio to record their first full album entitled “Ride The World” which includes 13 catchy and powerful songs plus one intro. The diverse song material delivers everything a fan of female fronted Symphonic, Gothic, Power Metal is longing for: Melodic Metal with driven guitars and tons of hooks, classical, orchestrated parts and folk elements plus some mega ballads. Other highlights are the more than 15 minute long epic “A Game Of War” and the bagpipe performance by Gustavo Rodríguez.
The group consists of members from other well known Spanish Metal bands such  as Warcry, Avalanch, DarkSun or Banda Nocturna.
Line-Up: Lady Ani – Vocals; Dani G. – guitar & vocals; Gustavo Rodríguez – Bagpipes, Juan Gómez – keyboards; Adrián Huelga – bass, Alberto Ardines – drums
www.facebook.com/lastdaysofeden
http://lastdaysofeden.es