INTERNATIONAL NEWS : ALMANAC THE NEW BAND OF GUITARRIST VICTOR SMOLKI HAS FINISHED THE PREPRODUCTION ON THEIR DEBUT ALBUM 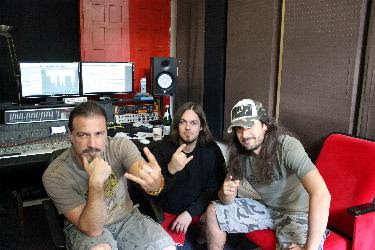 The recordings in the studio will begin in mid September and be documented in a Vlog. Here comes a first video message for the fans from the band:http://youtu.be/0TnxuMpewBI
For all the members of ALMANAC, the new band of guitarist Victor Smolski, this debut album is a new, exciting, and very interesting chapter that has now begun. Traditional metal in conjunction with classical music, world music and elements of Russian folklore with a modern sound make ALMANAC an absolute listening experience.
“Fans with an interest in deeper subjects including history and culture will also be able to dive into a new world with our first album, which combines historic and modern parallels that will surprise many”, explains Victor Smolski, “From the warlike nomadic horsemen in the steppes of Russia, to the Tsardom, Ivan the Terrible, warlike Cossacks who dominate the Tatar, the siege of Constantinople and the Mongol invasion are stories about battles, wars, intrigue, conquest, terror, power and love that can be heard vocally using the different styles of our voices”, says singer and lyric writer Andy B. Franck.
Victor Smolski adds: “The first phase is already done, now we are currently engaged in working on the arrangements of the songs. We're thrilled about this first release and of the many albums to come commencing from spring 2016, also we are very eager to let loose the mighty power of ALMANAC to the people, on many different platforms as possible as well as on stage.”
The album will be released on Nuclear Blast in Spring 2016.
For more information:
https://www.facebook.com/AlmanacVS.band
on septiembre 06, 2015